2013 represents the 200th year of Maharaja  Swati Tirunal’s birth. The  lecture demonstration on Dec 19, 2013 on the (little known) set of dhrupads composed by the Maharaja cast a new light on the composer.

Maharaja Swati Tirunal was a versatile and prolific composer whose musical output included kritis, varnams, and several other compositional forms. Couched in the midst of this output is a set of 15 dhrupads.

Dhrupad is an older form of Hindustani music, generally perceived as a slower form of music that requires a great deal of musical sensibility to appreciate.

Kanniks pointed out the Maharaja’s dhrupads are similar to the mainstream dhrupads of the 1800s and he demonstrated some of them. He delved into the structural make up of these compositions and the prosody behind them.

The highlight of the presentation was the demonstration of the ragmala dhrupad by his daughter Vidita Kanniks (recorded) that covered 14 ragas in quick succession in as little as 6 lines of poetry.

The Maharaja’s adept handling of the dhrupad compositional form represents his skill as a composer and also his pan Indian outlook that caused him to host musicians from all over India in his court creating a vibrant multi-cultural  environment that created the inspiration for new musical works.

Senior violinist A. Kanyakumari created a kind of history at The Music Academy last week at her lec-dem at Music Academy - the the topic was ‘Innovation of  7 Ragas’.

The kritis she had chosen were of Annamacharya’s as the ragas were named after the 7 hills of Lord Venkateswara.

Each raga has been Melakartha Ragam, like the one ‘Sharanamuna Vibhishana’ in raga Vrushabadri is a Janya raga of Kanakangi, which she announced and demonstrated with Aarohana & Avarohana.

Mallula Thejasvi, a student residing in US gave the vocal support which was applauded by the august gathering wholeheartedly.

She requested the senior vidvans to popularize these songs, the CD of which she has already sent to some of the musicians. 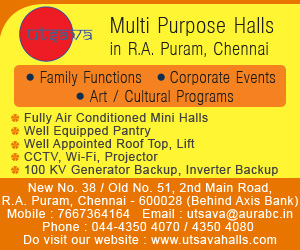